A small group of people living in a squalid village at Germany’s coast follows the invitation of a Medium and gathers in a lone house. It is the eve of December 24th, 1720. These Villagers have been haunted by the same spirit since a terrible flood killed more than a third of all residents three years ago. Like all the people who died that night, this spirit, too, returns to the village once a year. They come to mourn their death, but also to seek justice.

The Villagers know why they have been singled out. They all played a part in the brutal passing of this person. They were bystander, aide, or murderer. According to the Medium, the haunting can only be stopped if the Villagers invite the Ghost into their midst, return a sense of self to what once was a person, and confess what each of them did that night four years ago: “Honesty,” the Medium stresses, “is your only way out. You will suffer tonight, may even die, but, if you do, it is with a chance for redemption.”

However, not every Villager joins the conjuring for the sake of doing penance. They may, instead, seek the path of deception to protect themselves or someone else at the table. But lying comes at a cost and will put everyone present in danger, as each lie told stokes the Ghost’s pain and its wrath.

Stille Nacht (Silent Night) is a supernatural one-shot role-playing game for 2 to 4 players and a facilitator. Reversing the usual setup of a TTRPG, it is the players who create the world and its narrative, while the facilitator, in the role of a ghost, becomes a collector of narrative breadcrumbs, a detective whose memory is unreliable but thirsts for the truth—or a truth.  The ghost's story emerges through improvisation. The roles of bystander, aide, and murderer are assigned before the game in secret and at random.

Stille Nacht is about jointly creating a melancholy tale about human connections reaching into the afterlife, about secrets, hardship, love, hate, pain, and loss. It is rule-light, and the only one rolling dice is the facilitator. Depending on the number of players, a game session usually takes between ninety minutes and two and a half hours.

You can find the print edition of Stille Nacht here. Watch a sneak peek!

Stille Nacht Q & A with Petra

In order to download this rpg you must purchase it at or above the minimum price of $12 USD. You will get access to the following files:

Support this rpg at or above a special price point to receive something exclusive.

If, for whatever reason, you find yourself unable to purchase the PDF version of Stille Nacht at its listed price but would love to play it - grab a community copy!

This is genuinely one of the greatest experiences I've had in 15+ years of playing tabletop games. It produces some astounding roleplay, and the nature of how it works means that everyone finds themselves reaching into emotions they didn't even expect. Discovering the characters together, crafting the pieces of the puzzle at the same time as one builds it, and telling a unique story every single time - all in one single session.

The setting also helps immensely to add to the tapestry players weave on, though I'm a little biased, seeing how the 1717 flood is part of my own family's history too.

This is highly, highly recommended. A must-play for anyone who likes mystery and delving deep into characters, even more so if you enjoy improvising stories.

STILLE NACHT is a storytelling RPG set in a small German coastal village. The village was destroyed by a flood, and now haunted by a ghost. The players are the villagers, some of whom are responsible for the ghost's death, and the facilitator plays the role of the medium/ghost. Unlike most games, the facilitator does not know what really happened from the beginning, and has to collect the stories the players tell them. The layout and writing are fantastic, and I love the meticulously researched setting and history lesson on the Christmas Flood of 1717. 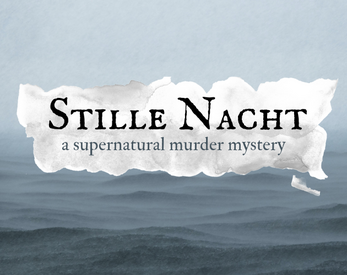 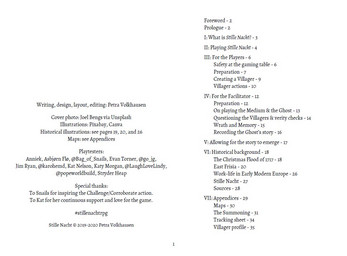 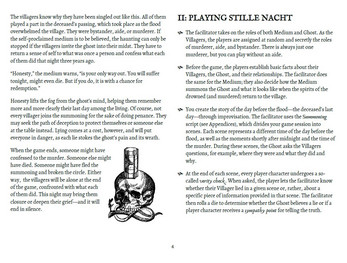 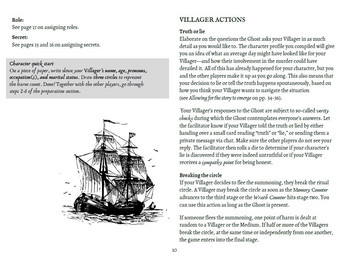 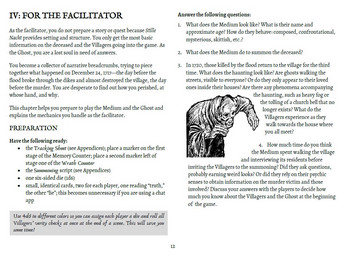 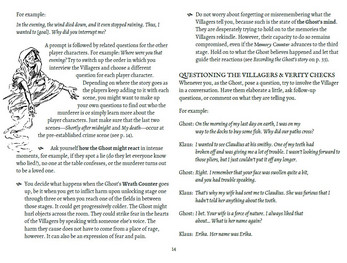 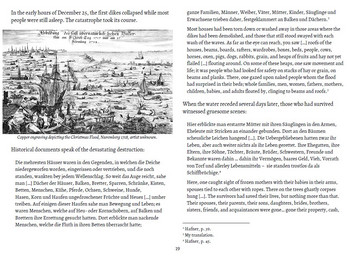 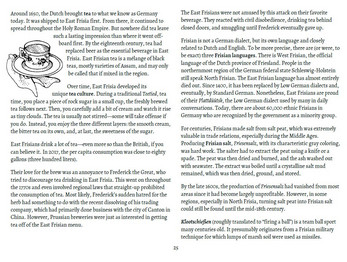 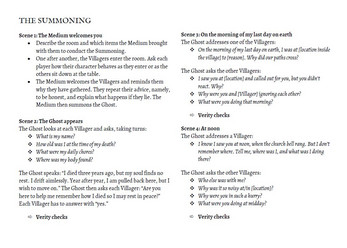 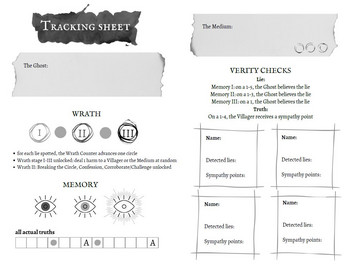